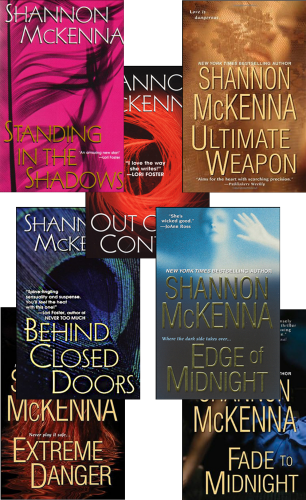 Part of The McCloud Series

Behind Closed Doors
Surveillance expert Seth Mackey knows everything about the women that his millionaire boss toys with–and tosses aside. Her vulnerable beauty haunts him and her fresh innocence stirs a white-hot passion that he can barely control. Raine is pure temptation, but Seth has something more important to take care of first. He’s convinced that his boss, Victor Lazar, is responsible for his half-brother’s murder. He cannot put his secret investigation at risk, but he can’t stop wanting her–craving her–and soon he knows he can’t let Victor have her. For Raine may be Victor’s next victim. . .

Standing in the Shadows
Connor McCloud won’t forget the day his friend Ed Riggs almost killed him. It cost Connor what he wants most—Ed’s daughter Erin. He can’t have her now, but she still haunts him. When an old enemy resurfaces, Connor will do anything to protect her.

Out of Control
Davy McCloud has one rule: never follow blind impulse when it comes to women. But he breaks it when Margo Vetter shows up. The sexual hunger–and the instinctual protectiveness–she awakens are too strong to resist.

Edge of Midnight
On the very day an arsonist burns down Liv Endicott’s bookstore, she finds another shock; Sean McCloud. He’s still the man she’s always wanted. But wanting is not the same as trusting, and she doesn’t dare let him get close. But a ruthless killer is gunning for Liv, and she’ll die unless they join forces to unearth a chilling truth–and come together in a blaze of searing passion…

Extreme Danger
Nobody’s home when Becca Cantrell takes a midnight skinnydip–and is hauled out by a guy with burning eyes. He is the embodiment of her most intense fantasies. And she’s up for risky thrills…

Nick Ward can’t tell Becca that he’s spying on a vicious Russian crime boss. She could be an assassin sent to kill him, a call girl sent to distract him, or worst of all–a clueless innocent. Anyway he looks at it, she’s trouble: beautiful, bare, dripping-wet trouble…

Ultimate Weapon
Val Janos is all about undercover operations. He is mysterious, sinister, and lethally hot. Only Tamara can understand–and match–the intensity that drives him to win at all costs.

Val has one weak spot: Imre, the man who befriended him when he was a kid abandoned on the streets of Budapest. But Val’s worst enemy knows about Imre, and his head is on the block if Val doesn’t deliver Tam…

Fade to Midnight
If the wrong person learned of Edie Parrish’s gift, her life would be in danger, so she is good at keeping people away. But when Kev Larson discovers who she is, Edie’s only choice is to trust him. And soon, Edie can’t resist her consuming desire–even though she knows she’ll have to pay a price for it. 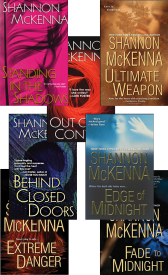