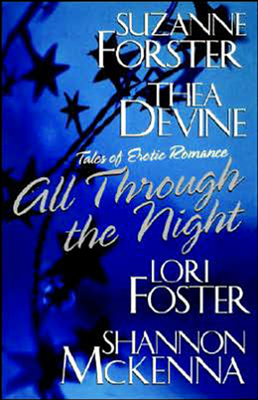 All Through the Night

He watched her silently for a long moment, and she tugged her shirt down again, drawing his gaze to her belly. Under the weight of his eyes, that scant inch of exposed flesh seemed outrageously intimate. She covered it instinctively with her hand. His dark gaze dragged slowly up her body, lingering appreciatively at her breasts. She stared back, fascinated by the stark, elegant planes and angles of his face. The flames of the campfire flickered and danced hypnotically in his eyes.

“I want to be closer to you, Annie,” he said softly. “Close enough so I can tell what kind of shampoo you used tonight. May I?”

Annie’s lips trembled, and she clamped them together. The velvet-soft tone of his voice made her legs feel as if they wouldn’t hold her if she stood, and an unfamiliar ache deep in her belly made her restless and anxious. His taut, muscular backside was beautifully showcased by his loose, crouching pose. She dragged her eyes away from it and pulled her mind back to his question. “Um, yes,” she said, trying to sound casual. “And thank you for asking.”

He rose to his feet with catlike grace, and walked slowly around the fire. He loomed over her for only a second or two, but the time dilated oddly as she stared at him from that odd perspective, her eyes skittering in nervous fascination up his long, muscular legs, over the bulge in front of his jeans, his flat belly and barrel chest. He sank down in front of her, studying her with grave concentration. He closed his eyes and took a deep breath, and a beatific smile spread across his face. “Lavender,” he said softly. “Yum.”

Annie’s ears roared. His nearness affected her like the deep, pervasive thundering of a huge waterfall; filling her senses and blotting out everything else. She stared, rapt, at the dramatic sweep of his black lashes, his sharp cheekbones, the seductive grooves that bracketed his lazy smile. “It’s an aromatherapy shampoo,” she explained in a small, breathless voice. “It’s supposed to be, um, soothing.”

He opened his eyes. “That’s strange,” he murmured in mock puzzlement. “I’m not soothed at all by the thought of steaming, lavender scented suds cascading over your pink, naked body. On the contrary.”

An image of Jacob in the shower assailed her; that big, powerful body gleaming and naked, slippery with soap. Her head swam, and she swallowed hard and leaned forward, sniffing his damp hair. “Pert Plus, shampoo and conditioner in one,” she guessed. “You’re a no-nonsense sort of guy. Always on the move. No conditioning rinse, no styling lotion, just wash, comb, and go. Right?”

His dark eyes held hers with quiet intensity. “That’s true,” he admitted. “I’m very high-energy. But I know how to slow down.”

Annie clutched the can of peaches tightly to her chest with both hands, and looked down into the fire. “That’s good,” she said, almost inaudibly. “Going slow is very important.”

They sat silently for a long moment. He put his big hand gently over hers, stilling its fine tremor. The whisper-soft contact sent a sweet, tingling flood of anticipation through every nerve in her body.

“I’ve changed my mind about the peaches,” he said in a husky voice, tugging the can away from her. He speared a chunk, plucked it off the end of the fork and examined it, heedless of the syrup dripping voluptuously over his hand. He took a bite and closed his eyes for a long moment as he chewed and swallowed, then opened his eyes with a blissful smile. “Succulent,” he commented softly. “Tender and soft and silky, dripping with sweet juices. Divine perfection in a can.”

She stared, fascinated, as he slid the rest of the peach into his mouth with a growl of pleasure. “I’ve never looked at canned peaches in quite that way,” she admitted.

He laughed softly. “You’ve got to look at things in just the right light before they’ll give up their secrets.” He snagged another piece between his thumb and forefinger, and admired it from all sides. “Under the enchantment of sweet Annie, these peaches are the manna of the gods. Come closer, Annie. Let me show you.”

She gazed at him, flustered and nervous but irresistibly tempted by the burning invitation in his eyes. She leaned forward and opened her mouth to take a bite of the fruit. His other hand gently seized her shoulder, holding her still.

“Wait,” he said in a low, admonishing voice. He leaned closer, surrounding her with his scent; shampoo and soap, crisp denim, damp leather. “First you have to concentrate. Yield to the enchantment. Let it lead you. There’s no hurry.”

Annie blinked, and gazed at the chunk of peach. She stared at his long, elegant brown fingers, wet and gleaming with sticky syrup, and she squirmed restlessly, her breath jerking in and out of her lungs. “OK, I’m concentrating,” she said testily. “Now what?”

“Look at how beautiful it is,” he suggested in a whisper, his warm, fragrant breath tickling her ear. “How golden, and full of light. How juicy and plump. It’s ready to give itself to you, to be absorbed into your body, to become part of you forever. Let your mouth get ready. Salivate. Savor the moment. Wallow in the sweet agony of anticipation.”

The peach slid out of focus and became a shining golden glow in the foreground. His lean, dark face shifted into focus behind it, his eyes fixed intently on hers. “OK, I think I’m there,” she told him, her voice low and shaky. “I’m pretty sure that I’ve, ah, yielded to the enchantment of the peach.”

His teeth flashed in a swift, brilliant smile. “Good,” he murmured. “Now open your mouth and close your eyes.”

She closed her eyes and opened her mouth obediently, making a tiny gasping noise as the intensely sweet wedge of syrupy fruit nudged itself between her lips. She took a bite.

He was right. It was delicious, but she wasn’t the one who had cast the spell that made it so. That was all Jacob’s doing. The sweetness of the fruit shimmered on her tongue like trapped sunshine, and her body was hot, pulsing, dazzled. She opened her eyes, her defenses swept away, and stared into the endless depths of his black eyes.

Jacob’s wild, potent magic tugged at her, opening up wild, verdant places deep inside her mind; places she’d never shared with anyone. A fey fearless part of her took over, and she leaned forward, taking his wrist in her hand. She drew it towards her lips, and took the last morsel of peach gently into her mouth, licking the peach syrup off his thumb and forefinger, with delicate little flicks of her tongue. She drew his fingertip into her mouth and swirled her tongue around it.

His eyes dilated, and his breath shuddered through his chest, harsh and audible. His face was suddenly tense, almost grim; the teasing gleam in his eyes gone and the depth of his hunger unmasked.

Annie let go of his hand and shrank back, startled at her own boldness. Jacob looked down at his fingers as if they were not his own. “Does this mean that I can stay with you tonight?” he asked hoarsely.

A final spasm of doubt clutched her, warring with the ache of longing that he’d awakened, and making her uncertain if she could really live up to her silent promise of unbridled sensuality. And it was insane to make herself so vulnerable, all alone in the dark as she was. But if he’d wanted to hurt her or force her, he could have done so ten times over by now. And she’d been alone in the dark for a long time now, if she counted these last, bad months with Philip. What harm could there be in a light-hearted tryst?

“I’ve never fallen into bed with a stranger before,” she whispered.

Jacob picked up a stick and stirred the coals with it, biding his time. “We’re not strangers. I’ve been courting you for days.”

She opened her mouth, and was utterly surprised when the simple, naked truth popped out. “I’m running away from my ex-boyfriend,” she blurted. “I’m wrecked, Jacob. You’re a really cute guy, and it’s nothing personal, but I just got out of a bad situation, and chances are I’d disappoint you anyway.”

He gave her thoughtful frown. “I doubt that very much. Besides, just because your ex-boyfriend is a jerk, is that any reason to deny yourself great sex with a guy who asks nothing more of you but to worship at the shrine of your incredible beauty?”

That cracked her up. She forced herself to choke the giggles down when they threatened to melt into tears. “Mr. Modesty. What makes you so sure it would be great sex?”

A soft, amused smile crinkled up the lines around his eyes. “Listen to your heart, Annie.”

The gentle words moved her. Something softened and shifted, deep inside her chest, fanning slowly open like a crimson flower.

The fire crackled and popped, the coals glowed with shifting shades of red, like pulsing hearts. Jacob pushed back a lock of hair that was clinging to her cheek. “Let me please you tonight, Annie.”

She gave a quick, jerky nod.

A delicious shiver racked her, though she was far from cold. “Yes,” she whispered.