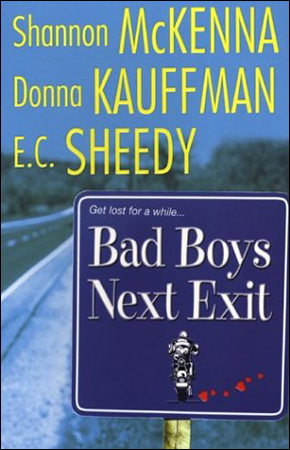 All Jane Duvall wants is to bag another big account for her headhunting firm, even if it means stealing a key employee right out from under sexy hotel CEO Michael “Mac” MacNamara’s gorgeous nose. But Mac can tell that the luscious, elusive Jane is up to no good. He has to find out what game she’s playing–even if it involves giving her a very private tour of the hotel’s finest suite, where she can take whatever she wants from him–and he’ll give her everything he’s got in the process. . .

It wasn’t wishful thinking; this was really, truly happening. She felt delirious, lost in a feverish dream. Her heart thudded against her ribcage like it wanted to get out. And now that the door was shut, she had to turn around and face him. She had to . . . to do something with him. She caught a glimpse of herself in a lavish, gilt-edged mirror. Pale, heart-shaped splotch of a face, eyes wide with terrified excitement.

His warm hand came to rest on her shoulder. She turned and looked up. His clear gray eyes asked a question that her entire body longed to answer. That was when she realized why her throat felt closed. She didn’t want to lie to him. Even a passive lie felt wrong. She could care less about Brighton Group. This was more important. She’d never felt so alive, poised on the brink of something miraculous.

But if she told him the truth now, the miracle bubble would burst and the moment would be lost. It would be all business; explanations, apologies, a hasty and embarrassed retreat with her tail between her legs. A sharp lecture from her boss to look forward to.

She couldn’t risk it. If it came down to a choice between fantasy or nothing, she’d go with the fantasy. For as long as she could.

She reached out and rested her palm against his chest. He jerked as if she’d burned him. The smooth white field of fabric looked as cool and pure as snow, but beneath it, he was all hard, resilient muscle and vital male heat. His ribcage rose and fell. His heart thudded rapidly against her hand. He was so tall, she was going to fall over backwards.

He must have read her mind, because he cupped the nape of her neck with a low murmur, slid his other arm around her waist and pressed her against his hard body.

It had been so long since she’d embraced anyone, other than brief social hugs. The intimate contact was a soothing, stimulating rush of pleasure. She drank it in with a tiny moan. “Mac, what are we doing?”

“Isn’t it obvious?” His hot breath fanned her cheek, her ear.

His mouth covered hers. His lips were as velvety soft as she had imagined. She knew the pros and cons of teeth and tongue, open versus closed and all the gradations in between. She had her preferences, like everyone else, but this feeling was entirely outside her experience.

The warm, seeking pressure of his mouth called to every buried yearning in her heart. His faint beard stubble rasped across her jaw. Flames raced through her body like beacon fires over a dark landscape, stirring desires she’d never felt. Warmth unfurled in her chest, her belly, between her legs. Colors exploded, swirling behind her eyes.

His kiss grew bolder, coaxing her wider open. He tasted hot and deep and wonderful, with a hint of coffee in the background. His breath was sweet against her face. She flung her head back, gasping for air.

“Your lips are so soft.” She blurted the words out before she had time to wonder if it was a stupid thing to say.

He laughed softly against her mouth and kissed her again. His fingers tightened on her hair, and his mouth demanded more.

She flung her head into his hands and opened to the bold thrust of his tongue. Her mouth danced with his, exploring him with eager abandon. She was suspended in space, a chaos of seething heat.

A thread of panic uncoiled inside her. This shaky, falling apart feeling was not what she’d expected. She’d certainly never felt this way with Dylan, or anyone else. “Mac? I feel—I feel like I’m—”

She pulled away from him, flustered, and stumbled back with her hand clamped over her swollen mouth. Her heel caught in the carpet. Mac dove to catch her, and they toppled together onto a soft, brocade covered sofa.

Mac lifted his weight swiftly off her body. “Damn. Sorry about that. Are you OK? Did you hurt yourself?”

She started to shake with silent, hysterical laughter. “I’m fine, thanks,” she said. “Just . . . falling to pieces, that’s all.”

He dropped to his knees in front of her, resting his big, warm hands on her knees as he gazed searchingly into her face. She would never have dreamed that knees could feel so much, drinking in his heat, tingling with pleasure.

“You sure you’re OK?” he asked hesitantly. “You look like you’re about to cry.”

She shook her head. “I never cry,” she told him.

They stared at each other. He reached up and gently pushed back a lock of hair that was trailing over her cheek. She leaned closer, until she could feel his warm breath. His magnetism tugged something deep inside her; a slow, inevitable pull, an aching hunger for his scent, his heat, his vital essence. Her arms slid around his neck as his lips caressed the side of her face. He smoothed her tight, straight skirt up so that he could move between her parted thighs and slide his arms around her waist. The closer he got, the closer she wanted him.

His weight shifted, and he hoisted her up so she was lying on the couch. He bent over her, his lips moving over her face with sweet, seeking gentleness. She was floating, clinging desperately, barely noticing the buttons on her shirt giving way, one after the other, tiny little silent pops, the pressure of her blouse releasing over her breasts.

And oh, God, he was all over her now, so big and hard and heavy. This was happening so fast. Her body was going nuts. She vibrated beneath him. Her skirt was shoved up to her waist and Mac lay between her splayed legs, giving gave her all his strength and heat to push against. She wanted all of it. Needed it.

Need? She couldn’t afford to need this man. She knew nothing about him. She tried to stop her hips from pressing eagerly up against the hard bulge at his crotch. She couldn’t stop. She could barely move beneath his weight, and every breathless, heaving wiggle deepened the pleasure, sharpened the throbbing tension.

Mac’s mouth moved over hers, caressing and exploring, drawing out sweetness and giving it back in equal measure. She turned her face away to gather her wits, but he caught her face in his hands and jerked it back, covering her mouth again with a low growl of command. He stroked the sheer fabric of her thigh-high stockings, all the way up until he reached bare skin. “Your stockings drive me crazy,” he said roughly.

She clutched his shirt, crumpling the fabric in her fists as her hips tightened, squeezing him. She arched, taut as a bow about to release—oh, God, no. No. This was insane. All alone in a hotel room with a total stranger. She would fall apart. Never find her way back.

She wrenched her face away again. “Mac? Please—”

Her panic swelled to a frenzy. What had she done? She’d had no idea the stakes would be this high. She was gambling with coin she could not afford to lose. She’d met this man twenty minutes ago, and these emotions were stronger than anything she’d ever felt. If he took what she’d offered him and then buttoned up his pants, thanks, that was fun, have a nice life . . . what was your name, again? It would be no more than she deserved, but she would be destroyed. She didn’t do casual sex. She’d wanted it, yes. Ached for it. She’d thought she could handle it, and it had taken this inside-out feeling to realize how thin the veneer of her self-control really was. How vulnerable she was beneath it.

Suddenly she could move. Cool air moved over her damp face and her bosom. It rushed into her shuddering lungs. Mac was up on his knees, unbuckling his belt, yanking his shirt out of his pants. His face was flushed, his eyes fierce and hot and focused upon hers.

She struggled up onto her elbows. “Mac, please stop.”

He went still, hands frozen on his shirt buttons. His shirt gaped over his broad, muscular chest. An arrow of dark hair disappeared into low-slung briefs, and she wrenched her gaze away—too late. She’d already seen what was poking out of those briefs, long and thick and hard against his flat belly. Whew. Formidable.

“What?” he said, incredulous.

She was shaking so hard, she collapsed onto her back again. Her breath rasped audibly between parted lips. “I can’t just ah . . . do it.”

He stared down at her. “I thought this was what you wanted.”

She pressed her hands against his chest, but instead of cotton, her hands found hot, naked skin. She tried to snatch her hands back, but Mac trapped them against his chest. His muscles shifted beneath his skin with each breath. His heart throbbed, quick and hard against her palm. “I know it looks that way,” she faltered.

“Looks?” His chest jerked beneath her hands in a soundless laugh.

“Jane.” His voice was flat. “This didn’t feel like nowhere to me.”

The silence was so long, she finally opened her eyes and peeked. He was staring at her body. Taut nipples poking through the lace of her bra, skirt crumpled around her waist, legs sprawled wide. Face hot.

He released her hands, and sighed raggedly. “I can hardly be blamed for getting the wrong idea.”

Her face flamed hotter. “I know. I’m sorry.” She attempted to button her blouse. A lost cause if there ever was one, lying flat on her back. She couldn’t make a single button connect over her breasts.

He lifted himself off and stood, closing his fly. He ran his hand over his reddened face. “I’m the one who should be sorry. I read your signals wrong. I don’t force myself on women. It’s not what gets me off.”

“Of course not!” She struggled to sit up. “It’s not your fault! I was very misleading, and I’m the one who should be sorry. Not you. Really.”

“Then kiss me again,” he demanded.

Her eyes dropped. She buttoned her blouse with shaking fingers. “I don’t think that would be a very good idea,“ she whispered.

He lifted her chin, forcing her to look at him. “I won’t open my pants. I won’t force you in any way. Just kiss me again, like you kissed me before.” He sank down next to her on the chaise. “Please.”

His stark tone silenced her. His face was taut, his hands clenched into huge fists. She wasn’t the only one shaking apart. She was moved. Her emotions felt so clear and bright. The impulse to soothe and reassure him was irresistible. She knew how it felt to fall to pieces.

She leaned closer, and brushed her lips against his grim mouth.