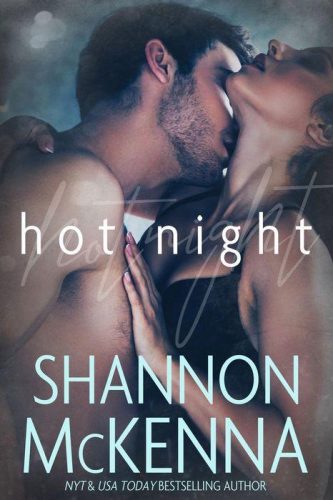 Abby Maitland has landed the chance of a lifetime—to work on a dazzling exhibit of priceless shipwrecked Spanish treasure at the Silver Fork Museum, and she isn’t going to fumble it. But when a nightmare date and a lost house-key land her in a tight spot, a sexy locksmith comes to her rescue.

Zan makes her heart pound and her toes curl, but she’s seen his type before. He doesn’t fit her dating profile, not with that battered leather jacket, those tattoos, that wicked, bad boy smolder in his eyes. She’s finished with guys like him. Been there, done that.

Problem is, they can’t seem to keep their hands off each other…

Zan Duncan has gotten into more than his share of trouble in his time, and it shows. Maybe the succulently gorgeous Abby Maitland doesn’t think he’s boyfriend material, but that’s no reason not to give in to the desire that roars between them. So he offers her a scorching, no-holds-barred secret affair. No one had to know, not her neighbors, not her boss. He would just sneak into her house by night, drive her mad with pleasure, and melt away with the dawn, leaving her aching, tingling. Exhausted.

What could possibly go wrong?

Abby can’t resist his seduction—but there is a ruthless monster in Silver Fork who wants that buccaneer’s gold for himself—and Abby and Zan are the perfect scapegoats for his evil plan. But they have no clue they’re in the crosshairs—at least not until people around them start to die… 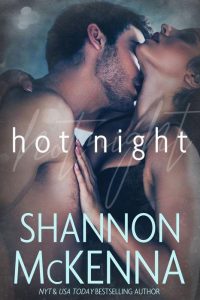 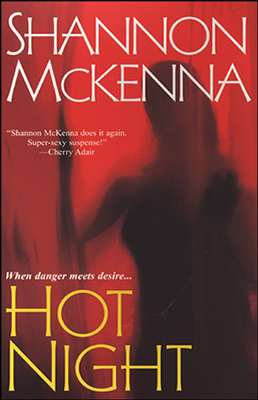 She hadn’t even turned to check. “How do you know I was—”

She unlocked her door and flipped on the light. His mind went blank, staring at the fine, creamy silk blouse. The way it crumpled around the curve of her waist where it was tucked into her skirt.

He struggled to remember his clever plan of action.

“Yes, I do own a jacket! One of them even matches this skirt. But I was running late this morning. So don’t get on my case about it.”

“I wasn’t thinking about your jacket,” he said.

“Oh.” She looked away, embarrassed. “Well, you’re always bugging me about my clothes, so . . . I’ll just make that coffee, then.”

He looked at her feet. Black spiky heeled pointy toed fuck me pumps. “You sprinted for the bus in those shoes?”

“There’s a technique to it,” she murmured. “Your choices are French Roast, Kona, Ethiopian, or Italian Espresso. I also have decaf.”

He tried not to laugh. “You know me well enough not to ask me questions like that. Choose for me. Be the expert. Dazzle me.”

Abby’s eyes narrowed. “Do not patronize me, Zan Duncan.”

Sheba padded daintily into the room, and promptly leaped into his lap. Zan buried his hands in her fur, grateful for something to occupy his hands. Sheba’s small body vibrated with throaty purrs.

Abby scooped some coffee into a fancy little glass pot, and sat down at the kitchen table across for him. She crossed her legs and arms so tightly, she looked as if she were tying herself in a knot.

She was so tense. He wished he could make her laugh, but he wasn’t up to being a clown tonight. He placed the cat gently on the floor, and stroked her arched back as she glared at him indignantly.

“You’re a great little kitty, but we’ve got to finish this cuddle session later,” he told the cat gently. “I promise, I’ll make it up to you.”

Prrt. Sheba stalked out of the kitchen, unmollified.

He took a deep breath and reached across the table, holding out his hand. Abby looked at it. “Take my hand,” he urged softly.

“What are you going to do with it?”

She stared at his hand for a long moment, and unwound one of her arms from across her chest. She held it hesitantly out to him.

He seized her hand. It was cool and slender, trembling as he closed his fingers around it. He stroked the network of violet veins at her wrist with his forefinger. “I have a proposition to make,” he said.

“Hear me out,” he said. “I know you’ve ruled me out as a potential boyfriend, so never mind that. I’m suggesting something different.”

Her eyes went big with alarm. “I don’t think I even want to know.”

He reached out with his other hand to touch the deepening rose of her cheek. So amazingly soft and fine. “Yes, you do,” he said simply.

She dragged in a hitching, broken gasp as he ran his finger across the gleaming curve of her lower lip in the wake of her pink tongue. Then the upper one. He could do it forever. Rosy and moist and inviting.

“Something’s happening between us,” he said. “It’s very strong. It won’t go away just because it’s inconvenient for you.”

He felt her breath quicken, a warm against his wrist. “I don’t want to complicate my life,” she said, sounding lost. “I’m trying so hard.”

“I don’t want to complicate it either,” he said smoothly. “The arrangement I have in mind is exquisitely simple.”

She turned her face away, and put her free hand up to touch her hot cheeks. “I see where this is going.”

“Yeah. I know you do,” he said. “You’ve been thinking about it as much as I have. I want to be your secret lover, Abby.”

She tugged her hand away from his and wound it around her middle again. “That doesn’t sound simple. That sounds complicated.”

“Nothing simpler,” he said. “I’ll be your boy toy. I’ll come to your bed at night, when no one’s watching. Just play with me, Abby. Toss me away when you’re done. I’m very tough. I won’t get my feelings hurt.”

She stared at him. “But that’s ridiculous. I can’t do that.”

“Why not?” He captured her hand again. “It’s the perfect set-up. Private, secret. Nobody knows about it, nobody has opinions, or makes judgements, or asks questions.”

She closed her mouth, frowning slightly as she considered it.

“It doesn’t have to interfere with your hunt for the perfect husband, either. When it’s over, it’s over. It’ll be like it never happened.”

The teakettle’s low warble rose quickly to a shill wail, but Abby seemed frozen in place. He moved to deal with it himself, and she jolted to her feet as if waking from a dream, lunging for the kettle. Boiling water splashed onto her hand. She dropped the kettle with a gasp.

Zan sprang up and took her hand, examining the red spot. He turned the cold water on and held her hand beneath the stream. “Now would be the proper time to announce that I have a clean bill of health,” he said evenly. “No STD’s, ever. Always had safe sex. Just so you know.”

He kissed her wet hand. “So? What do you think of my idea?”

She pulled her hand away and dabbed it on a tea towel. “Wouldn’t it make you feel used?” Her voice was small.

He breathed down the burst of startled laughter that shook him before it could make him jittery and emotional. He had to stay icy cool for this to work. “Sure. So? What’s your point?”

“You don’t mind that? Because I would, if I were you.”

“Hey, it’s your average guy’s ultimate fantasy,” he said. “Having a gorgeous, classy woman use him for sex. Squeeze me dry, baby.”

“You’re not an average guy,” she said.

“No, I’m not,” he admitted. “Let me show you just exactly how far from average I actually am.”

“And you didn’t answer my question, either. If you felt used, you’d get angry with me. I think that you’re just pretending to—”

“Hold it,” he said curtly. “One of the perks of being a secret lover is that you’re exempt from this kind of cross-examination about emotions. That kind of stuff is for boyfriends, finances, husbands.”

She winced. “Ouch. I didn’t mean to cross-examine you.”

Back off, bonehead. Lashing out wasn’t going to earn him points.

This was tricky. He wanted to please her, and he wanted to punish her for putting him into a box. He wanted to strip her bare, to get so deep inside her mind that he could exploit all her secret desires. He wanted her in thrall to pleasure. He wanted total power over her.

Wow. Yeah, it would appear that he was angry at her.

“I didn’t mean to snarl at you,” he ventured. “It’s just that there are some things you just can’t ask of me if we want this to work.”

She turned away. “I’m not sure if I want it to work. Not if it means giving up any kind of emotional interchange.”

He was helpless to deny it. “You can’t have it both ways.”

“Then I’d better not have it at all. Not if it means keeping my mouth shut and letting you just . . . fuck me.” She got up, walked to the window and stared at the darkness. “Thanks, Zan. But no thanks.”

He struggled to express it in some way that didn’t sound offensive. “No. I didn’t mean that. I just meant . . . we have to keep it light. Lengthy discussions about our feelings would kill it.”

“Huh. I don’t feel very light right now,” she said bitterly. “But oops, look at me. Already breaking the rules by mentioning my feelings.”

He made a frustrated gesture. “That’s not what I meant, Abby. I just want us to stay in the moment.”

“Yeah,” he agreed. She gave him a look, and he threw up his hands. “OK, then. Wild, crazy, awesome sex. The best you’ve ever had.”

“Not much I can do about that.” He walked to the window and stood behind her, stroking her shoulders. The fine silk snagged against the hard spots on his hands. Time to wrest control back from the bad tempered beast and try the seductive and masterful routine again.

He nuzzled his nose into her hair. “Picture this. A day in the life of a woman with a secret lover. She goes about her day like always, work, lunch, shopping, friends. But she has a secret—her lover comes to her at night. He knows she’s awake, no matter how late it is. She’s so eager, she’s already naked and wet, thinking about other times, other nights.”

“My goodness. You think a lot of your own ability, don’t you?” The words were tart, but her voice had a telltale quiver.

He circled her waist, gripping thet deep curve over her hips. “He knows it, though,” he went on. “He can smell that sexy woman scent. She’s so ready, she’s about to come just from thinking about his touch.”

She exhaled a shuddering breath. He let his hands slide over her hips. “He covers her, warming her body with his.” He kissed her throat, skimming teeth across the delicate tendons. “His cock is as hard as steel. Dripping, just from thinking about doing his duty. And then . . .”

He let his voice trail off. Abby twisted around and gave him an accusing look. “And then? Don’t tease.”

“Whatever she needs,” he said simply.

She elbowed him. “That’s a cop-out. You can do better than that.”

“Oh, that’s just a beginning.” He rucked up her skirt until his fingers found velvety skin above the edge of her hose. “It depends on her. If she needs him to be gentle, rocking and sliding inside of her until she melts into hot liquid, he’s all for it. If she needs to be mounted from behind and ridden long and hard, that’s great.”

“But you like it, hmm?” His fingers found the perfect warm undercurve of her bottom, and explored it. So smooth, so round. 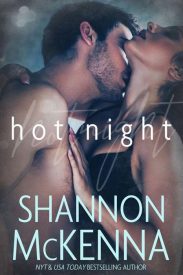