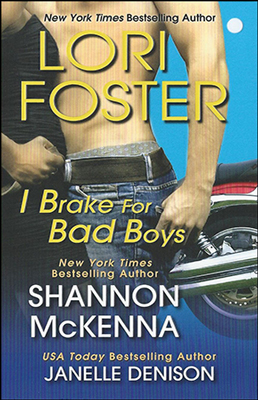 I Brake for Bad Boys

Tess Langley’s been hurt by love before. That’s why the voluptuous brunette prefers to keep her look low-maintenance and concentrate on her work as a massage therapist. She can tell by the scratch marks on gorgeous Jonah Marhkam’s back that the rich playboy is exactly the sort of man she should avoid, but when he offers to pay her an outrageous sum of money to tend to his guests at his luxurious mountain hideaway, she can’t say no. Except Jonah has no intention of sharing Tess with anyone else, and though he’s promised to be a good boy, she has no idea just how good he can be . . .

She sipped the espresso that Jonah insisted on making for her , but it did nothing to bring her back to earth. She was mellow and goofy from the wine, and trying very hard not to think about where this was almost certainly leading. If she thought about it, she would clench up and ruin it. She didn’t want to ruin it. She was having too much fun.

He wasn’t even coming on to her, just lounging his long, graceful self at the far end of the couch with a relaxed, lazy grin on his face, laying on the foolish flattery, exerting himself to make her laugh. It was working, too. She was giggling and snorting like a teenager.

She laid the espresso cup on the coffee table. “I’m a little tipsy, but I could still give you backrub,” she offered shyly. “It won’t be one of those intense, mystical massages you like so much, though. Our stomachs are too full.”

His eyes lit up. “Great. Fine. I’ll take whatever I can get.”

She set up the table and draped one of her flannel sheets across it, carefully keeping her back to him as he undressed. When she dared to turn around, she was surprised to see his jeans still on.

“You’re going to leave on your jeans? I can drape a towel—”

She squirted oil into her hands and stared down at him. She’d never been the target of a strategic seduction before. She’d been tempted by food and wine and chocolate, mountain and forest and moonlight. Now the choicest bait of all was stretched out on the table in front of her, eyes closed in anticipatory pleasure. He couldn’t wait to be touched. And she couldn’t resist for another second.

She lay her hands against his hot, smooth skin. A shock of awareness went through them both. He drew in a sharp breath, his eyelids fluttering. Far from relaxed. She could feel his tense, coiled eagerness. He was waiting, with the patience of a seasoned hunter for . . . what? What did he want from her? What did he expect?

She ran her hands over his powerful back, leaning low enough to smell his his subtle, unique scent beneath the perfume of scented oil. Clearly, he was either leaving it to her to make the first move or simply biding his time. She appreciated his delicacy and restraint, but she didn’t have a clue how to begin. If only she could take a little time-out and call Trish for a quickie consultation. Should she follow her neck-kissing fantasy and find out where that led? Her heart pounded with excitement. Maybe she would hyperventilate. It would be so awful to flub this, to embarrass herself. To have him, God forbid, pity her.

She was monumentally untalented in the bedroom, after all. Larry’s voice floated out of her memories, snappish and tense. “Can’t you please at least try to concentrate?” She’d tried and tried to be less ticklish and tense, keep herself from floating out of her body and noticing odd, comical things that made want to giggle—like the way Larry’s skinny shoulder-blades stuck out like wings.

Jonah’s shoulder-blades did not stick out like wings. He had the most beautiful, powerful back she’d ever seen. And she didn’t feel ticklish or tense. She felt hot. Inflamed. Her hands were sliding over him purely for their own pleasure, not for his. She didn’t have a therapeutic thought in her head.

She put both hands on his shoulders. She was leaning over, like she was actually going to do it, to just up and kiss that beautiful place on the nape of his neck that was so vulnerable and tender it just broke her heart and made her toes curl. She was inches away from the point of no return and drawing closer. Her breath came quick and fast and audible. He could probably feel it against his skin by now. The sense of anticipation, of waiting, swelled, like a wave about to crest.

She jerked back, and lifted off her hands. Damn lily-livered, scaredy-cat chicken. “What’s going on, Jonah?” she whispered.

His eyes opened. He looked unsurprised at the question. “A backrub?” he ventured, clearly just for the hell of it.

She shook her head. “I’m not buying it.”

He rolled onto his side and sat up, his legs dangling over the table. His erection strained prominently against his jeans. “Are we being truthful here?” he asked. “Totally honest and sincere?”

He reached out, very slowly and seized her wrists, pulling her towards him. He lifted her glistening hands and held them up, close to his face, breathing in deeply. “What smells so good?”

“Almond oil.” She stared at the size of his graceful hands. “With a few drops of essential oil. I change the oil according to the client.”

“Sandalwood and coriander.” She let out a silent gasp as he pressed her hands against his hot chest, splaying them out. Covering them with his own, sliding them around until his broad chest gleamed.

The clear purpose in his eyes made her breathless and giddy. “Jonah,” she said, almost inaudibly. “What are you—”

“It’s your own fault. You’re the one who blew the whistle. I was going to be such a good boy. I was going to play it cool, all polite and refined. Get my massage, and then show you to a guest room with a lock on the door. But no. You had to unmask me. So here we are, Tess. Now you have to deal with naked reality. Whether you’re ready or not.”

“Jeans,” she murmured. “Reality is wearing a pair of jeans.”