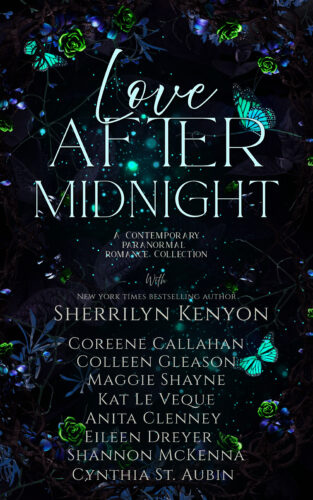 Vampires, ghosts and witches oh, my! Love After Midnight, Volume I includes NINE paranormal contemporary romances from nine bestselling authors. This set is intended to introduce you to fabulous new authors and exciting new series in one limited-time collection.

Please note: All the stories in this limited-time, special collection are previously published, but never before together. 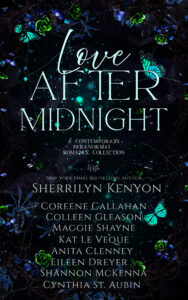 From Shannon’s novel, My Next Breath.

Zade isolated that sound from all the others competing to be heard: traffic, gusting wind, cold rain driving down on the black asphalt, dripping off the vinyl awning he lurked beneath.

Zade listened hard for that free-floating sound thread, thin as a strand of spider-silk waving around out there in the humming urban buzz of Seattle.

Yeah. There she was. Coming out of the Mercer Center with some people. Adults and kids. Umbrellas whooshed open. Cars pulled up. A few taxis stopped. He heard her, talking, laughing, saying goodnight. A subtle thrill racked him as that low, husky female voice stroked delicately down his nerve endings.

Simone Brightman. He liked her voice.

His phone vibrated in his pocket. He checked the display.

He tapped back a response.

Lightweights. His hired goons had been waiting hours in the rain. Boo-fucking-hoo. He was damp and chilled, too, but he wasn’t bitching about it. Nor should he.

It was what he deserved for prowling around in the dark like a fucking criminal.

Whatever it took. He’d kill for information about his lost brother Luke. And what he was about to do fell way short of killing. Nobody was going to get hurt tonight. At least not physically.

Simone Brightman had to know something. And that was as far as he’d gotten. Months had crawled by without a single opportunity for a chance meeting with her. He’d plotted and schemed, increasingly frustrated. But no dice.

Mostly she stayed stubbornly locked in her house. No errands, shopping, gas stations, malls, post office, restaurants, movies. No workdays at her biomed lab, which used to be the sum-total of her life. This once-a-week math tutoring thing she did with kids was the only reason she’d gone out at all since she and Noah Gallagher broke their engagement.

She must be depressed. Fine. He could work with that. All she needed to make her misery complete was some mouth-breathing scum menacing her on a dark street.

Add terror to the mix. And himself, never on the side of the angels.

He followed a brief conversation she had with some kids on their way out of the Center. He could barely hear what they were saying, but they seemed to really like her.

“Get home safe. See you next week.” There was laughter in her voice.

Finally it was just her, making her solitary way toward her car, not knowing that it had been disabled. About three blocks away now. Her rubber-soled lace-up leather boots squeaked.

Lately, for some unknown reason, she no longer bothered with her ultra-professional ice maiden look.

At first, he thought he’d miss that super-controlled vibe. It had been stimulating to watch that round, taut ass twitching purposefully along in tight pencil skirts as she went about her business, heels clicking.

Also gone: her sleek designer suits and smoothly styled hair. She’d been so tightly buttoned up it was actually kinda kinky-porno-hot. He got off on it.

Now when she got dressed, it was in battered jeans or pilled leggings, sloppy sweatshirts, full-length skirts. Black, horn-rimmed glasses so butt-ugly they passed for aggressively cool. Her curly blond hair—surprise, surprise, not smooth at all—was out of control, unless she bothered to pin it up or put it in a messy ponytail.

Her new look was as different from the old as it was possible to get. And it jazzed him just exactly as much. Go figure.

And he looked at her a lot. Getting surveillance vid-cams installed in her place had been a hell of a thing. Her home security was top of the line. He’d finally succeeded in maneuvering a few micro-drones through her front door, two while the housekeeper came in to clean, one while Simone was having groceries delivered. Completely silent, nearly impossible to see. One was perched on the kitchen light fixture. One was on a bedroom curtain rod. The last sat on one of the wall-mounted speakers in her living room.

She was always in her studio or bedroom. Always working. She slept very little, and ate so seldom it had actually started to worry him. The fuck? An adult human being couldn’t live on yogurt, a slice of toast, and the occasional fucking fruit chunk. It was a miracle that she functioned at all.

Less than a block away now. He was already getting a whiff of her. Warm, female smells. He seriously dug that honeysuckle shampoo. Couldn’t wait to sniff it at close range.

He stepped out of the shadow of the awning, and raised his hand to signal the men waiting down the street. One of them lifted his hand in response. They were ready. She was an easy target, parking an almost new Audi on a badly lit street like this.

His heart raced as his augmented sensory processor kicked into high gear, as if revving for combat. Which was overkill. He didn’t need an ASP jolt for this. The Obsidian researchers had wired him and rewired him during the Midlands experiments on their quest to produce the ultimate, relentless war machine. The data that speed-scrolled over his field of vision whenever he was stressed was a constant reminder of how they’d changed him. Permanently.

But he ignored it. He’d stolen himself back. He and all the rest of the Midlanders. He was more than what Obsidian had tried to make of him. Fuck them all.

Tonight—for her—he needed to be funny, smart, and unthreatening, for starters. And good in bed, if he got lucky. Past experience suggested that he would. It was bad form to get cocky about it, but whatever. A guy could hope.

In fact, he quivered with hope. Watching Simone for two whole months had kept him perpetually half-hard. It wasn’t like she was doing anything sexy. On the contrary. She mostly just sat there on the bed, cross-legged in a thick snarl of wires and cables, surrounded by screens, dressed in leggings and a sweatshirt. Braless. Eyes narrowed with ferocious concentration as she typed so fast and hard the detached wireless keyboard bounced against the mattress.

He loved how the mad typing made her nipples jiggle.

He could watch that for hours without losing interest. Simone Brightman’s life was slit-your-wrists boring, yet watching her somehow kept him continually buzzed.

He was in a groove with surveillance monitoring. Forget sleep. Not happening, even thought he’d sworn never to inflict sentinel sleep on himself again after their escape from Obsidian’s research facility at Midlands. He hated the way sentinel sleep made him feel. Constant vigilance turned even the strongest into a numb, circuit-fried robot, no matter how skillful he might be at alternating his brain hemispheres, resting one while using the other and blah-blah-di-fucking-blah.

He was good at it, yeah. And so? He was good at a metric fuckton of unspeakable things. That didn’t mean he would ever do them again. He’d won his freedom back. Obsidian could go suck its own dick.

But he’d do sentinel sleep for Simone. He’d do any number of desperate, unspeakable things for a chance to find out what happened to his brother.

Besides, watching Brightman prance around in her underwear was no chore. She was so damn pretty it just turned his head around. Why sleep when he could look at that?

She was almost upon him. His ASP processor sent a fire-hose of data scrolling wildly up both sides of his field of vision. His senses sharpened to a level beyond painful. He hadn’t expected this. Bullshit timing.

Her footsteps echoed in his ears, boom-scrape-squeak. Her soft breathing, the quick and steady drum of her heart. He smelled the warm mix of her hand lotion, her wool coat, the leather of her boots, heard the swish of her long skirt, the brush of wool tights between her thighs. He smelled the coffee she’d had not long ago and a hint of the vanilla flavored creamer she’d lightened it with. Whiffs of the perfume she used to wear back in her corporate days wafted out of her purse like little ghosts.

He also smelled the festering mouth-breathers who waited across the street.

His heart thudded loudly. In a few seconds, he’d see Simone in the flesh. The mysterious ex-fianceé of Noah Gallagher, Zade’s friend and fellow Midlander rebel.

A woman who might or might not hold the key to the last possible clue that could lead him to his brother.

Or to his brother’s bones.

That thought stabbed through him like a thin blade of ice just as Simone Brightman rounded the corner and hit his line of vision. 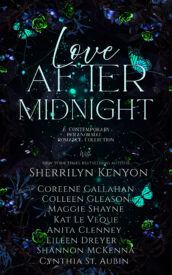