He fought for her. He bled for her. Now he’ll make her his own.

Famous bad boy DJ Anton Trask stays out of other people’s business. He learned that lesson long ago and paid for it in blood. But when the stunning Fiona Garrett shows up at one of his nightclubs asking for his help, his world is thrown into chaos. He and Fiona grew up together at GodsAcre, a remote doomsday cult in the mountains. She was fifteen years old when he busted her out of that hellhole, but she’s all grown up now. Anton hates losing control, but Fiona’s sultry eyes, soft red lips and gorgeous body make his heart thud and his temperature rise…

Pursued by a ghost…

Fiona Garrett is on the run from a brutal killer that the whole world believes to be dead. She hates asking Anton for help once again—she owes him her life already—but no one else could possibly believe her. Still, Fiona is unprepared for the effect Anton has on her…his hard body, the hypnotic glitter of his dark eyes, the raw male power he exudes. He sparks a desire inside her that she’d never imagined—and she can’t control the flames.

Anton wants to leave GodsAcre and all its demons in the past, but he and Fiona have no choice but to face them head-on as danger ignites all around them. All he can do is keep her close to him.

And the closer she gets, the less he ever wants to let her go… 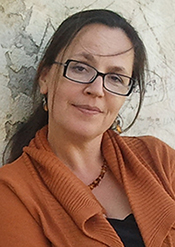