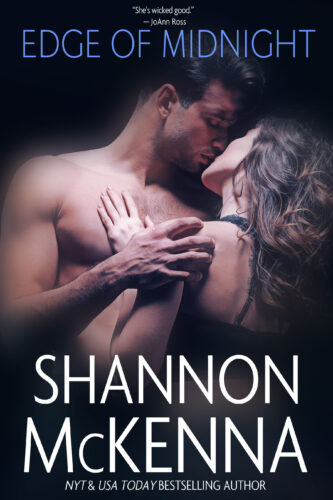 Book Four in The McCloud Series

He tried to forget her…

Sean McCloud tried to put the past behind him, but he’s haunted by that disastrous day, years ago, that he lost his twin brother and was forced to brutally drive away Liv Endicott, the girl he loved, to protect her from a ruthless killer. It almost broke him…but he did what he had to do…and she lived.

Then Sean discovers that Liv is coming home to open a bookstore in their hometown. The news electrifies and terrifies him, and nothing on earth can keep him from going to her.

She can’t help wanting him…

What were the odds? The very day that a stalker arsonist torches her brand new bookstore, Sean McCloud appears, striding through the smoke and rubble like an avenging angel.
It doesn’t help that the bastard is as stunning and charismatic as he ever was. Liv still craves his touch, but she knows better than to trust him, ever again.

But the ruthless killer from their past has finally caught Liv’s scent, after all these years. He won’t stop until she’s dead, and now the only way for Sean and Liv to survive is to join forces and somehow trust each other, to uncover the shocking truth before it’s too late… 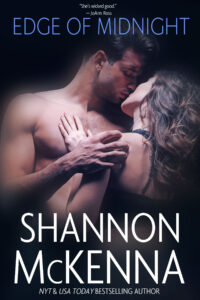 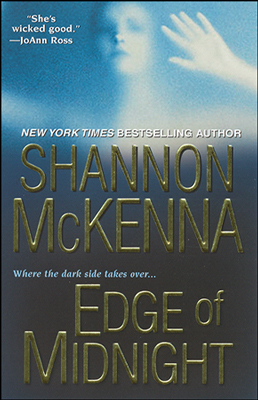 “Hey, Liv,” a low male voice said, from behind her.

Oh, God. She knew that voice. She couldn’t turn. Her muscles wouldn’t move. It was like that time she’d gone rock climbing. She had looked down in the middle of a steep bit, and frozen solid, fingers numb. Her bones, all rubbery and flexible. Her insides, vast and empty.

He didn’t speak again. Maybe stress had driven her to auditory hallucinations. And there was only one way to find out, so move.

She commanded her muscles to obey, and turned.

Oh boy. It really was Sean. Her insides tightened. She felt faint.

Holy crap, just look at him. He occupied so much space. The air around him seemed charged. He was so tall. So incredibly . . . big.

Had he really been that big fifteen years ago?

Certainly she herself hadn’t been. The thought stung like a spider bite. To think that with her bookstore trashed, her dreams in ruins and T-Rex to stress about, she was still uptight about her oversized butt.

And her tank top did nothing to control the jiggle and sway of her boobs, which were likewise bigger now, if somewhat, well . . . lower.

Plus, the poochy side pockets on her pants had been designed by the devil himself to make her hips look even bigger than they were.

She tried to speak, but her voice was rough and hoarse from all the smoke. She coughed, and tried again. “Hi,” she squeaked.

She didn’t want him to see her like this. Wounded, bereft. It was too much like the last time he’d seen her. Except that then, the smoking ruin had been her heart. And he was the arsonist who had torched it.

They stared at each other. She felt empty-headed, exposed.

She’d pictured running into him after she’d decided to come back to Endicott Falls. Many times. But in her fantasies, she’d been thinner. Boobs hoisted high in a power bra. Romantic, swishy white skirt and poet’s blouse, showing a faint, tasteful hint of sexy cleavage. Eat your heart out, you brain-dead chump being the subtle non-verbal message.

“Sean who?” she’d say. Then her eyes would widen, recognition dawning as she looked past the beer paunch, or whatever other defects he’d developed that had rendered him harmless. “Oh! I’m terribly sorry, I just didn’t recognize you!” she’d say, oh so sweetly. “How are you?”

This was not the current scenario. Her eyes kept dropping, darting up, trying to reconcile this man with the Sean of her girlhood memories. He’d been dimpled, laughing, gorgeous. A sinuous young panther on the prowl. The embodiment of dangerous male sexuality.

That succulent golden boy had become a grim, inscrutable man.

Faded jeans and a green tee-shirt showed off a long, powerful body that seemed thicker, denser than she remembered. His face seemed carved out of something hard. Longish hair blew loose and shaggy around his face in the hot gusts of air. Sun glinted off the bronze ends. His eyes were keen, shadowed. No twinkle. No dimple. No flash of white teeth. He looked tempered, and tough. Harmless, her ass.

He looked about as harmless as a long, sharp knife.

She had to tear her eyes away and look at her feet before her lungs would unlock and suck in a shuddering gasp of badly needed air.

Wow. He had a flair for the dramatic entrance. Deliberate or not, it was effective, how he’d framed himself in a fireblackened brick arch of the turn-of-the-century brewery she’d converted into her bookstore.

Backlit by sun slanting through the arch, wreathed with billows of smoke, he was like a rock idol taking the stage. Accepting the adulation of his screaming fans as his right and due. He smiled at her, and she crossed her arms over tingling breasts. No, not like a rock star.

More like a fallen archangel, guarding the gates of Hell. 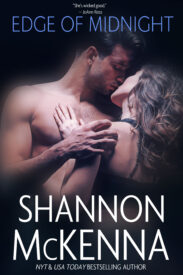