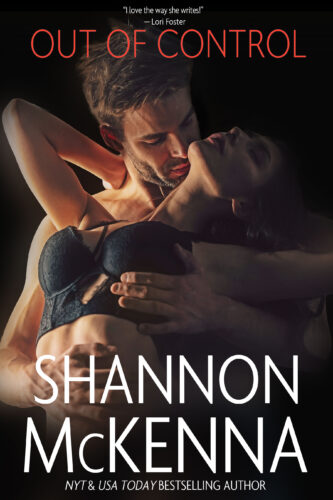 Book Three in The McCloud Series

In Behind Closed Doors and Standing in the Shadows, Shannon McKenna introduced the McCloud Brothers: intense, rugged, super-sexy, and deliciously sensual. Now, Davy McCloud is about to meet a woman he can’t trust–or live without . . .

Don’t get too close…

That’s P.I. Davy McCloud’s unwavering rule when it comes to women. He likes to keep his world strictly under control. But when the seductive and fascinating Margot Vetter starts teaching at the gym next door, his ironclad rules go straight to hell. He can’t control the hunger she awakens in him, or the powerful instinct to protect her…and then claim her as his own.

Margot’s been framed for murder. Broke and desperate, she has no choice but to ask Davy McCloud’s help. But the closer she gets to this sexy, enigmatic man, the harder it becomes to hold anything back from him…at all. Or even remember why she’s trying to.

But it’s a bad time to be blindsided by passion, because the monstrous evil lurking in Margot’s past is running her down fast. Soon they’ll be fighting back to back, just to stay alive… 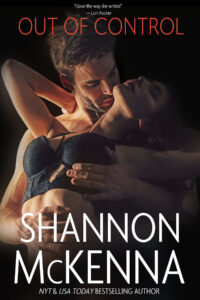 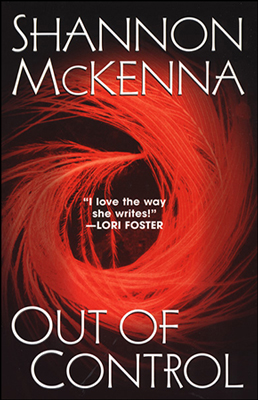 Davy lifted his shoulders in a faint shrug. “I recommend that you call the police. You’ve got a serious problem. They’ve got resources that I don’t have. In any case, I can’t help you unless you tell me what’s really going on.” He paused thoughtfully, and added, “Then again, neither could the cops. So whatever. If you want to talk, I’m listening.”

The laser brightness of his eyes made her mind go blank. “You’d be sorry,” she heard herself say.

“Probably. I never said it was smart. Like I said, curiosity is my vice. It’s a lot more compelling than drugs or rock ‘n roll.”

“You forgot about sex,” she said without thinking.

His eyes flicked over her body. “No, I didn’t.”

The speculative look in his eyes sent a shiver down her spine. As if lying to him wasn’t bad enough. Now she was flirting with him. Whoa, Nelly. Her inner devil slut was getting the upper hand, big-time.

She broke eye contact with great effort, and rubbed the back of her stiff neck, groping for a swift change of subject. “Looking over my shoulder all the time is giving me knots in my neck,” she murmured.

“I could give you a back-rub,” he offered.

She laughed right in his face. “Hah! I just bet you could.”

“I wouldn’t grope you. Seriously. I’m very good at it.”

She marvelled at how the urban blight light accentuated all the stark planes and angles of his face, casting every stunning detail in sharp relief. It figured. Only Davy McCloud could possibly look good in that light. “An offer of a massage is never innocent,” she told him.

He shook his head. “Don’t judge me based on your past experience. I’m not average. I mean what I say, and I keep my word.”

She blinked. “Oh. Gosh. Excuse me for not recognizing your lordly qualities and your incredible moral superiority.”

He inclined his head in a gracious nod. “You’re excused.”

She simply could not tell if he was joking or not. The guy was unreal. He kept a completely straight face. God, she was sick of playing the cast-iron bitch, never trusting anybody. Hell with it. Being touched by Davy McCloud would be super deluxe. She was going for it.

“Oh, whatever,” she said. “But if your hands stray anyplace south of my thoracic vertebrae, I’ll have Mikey bite you in the butt.”

The threat didn’t have much oomph, being as how Mikey was sprawled on his back, silently pleading for his belly to be rubbed.

McCloud leaned down and stroked him, his hand tracing one of the shaved patches. “What happened to him?”

“He got mouthy in Washington Park with a big, mean stray dog,” she told him. “He never learns.”

McCloud nodded, and got to his feet. He slid his hand beneath her hair and curved it around the back of her neck. Just that gentle touch alone made a delicious sensation ripple across her skin, all the relaxing comfort of heat, all the stimulating refreshment of coolness.

She slanted him an eloquent glance. “ Yeah, right, and take off my shirt, too? Get real.” She fished in her pocket for a hair tie, and wound her hair into a lopsided ponytail. “There. Go for it. Dig deep. I’m tough.”

He was fabulous. Neither a timid, irritating massage that just tickled the surface of knotted muscles nor yet a macho, insensitive attack upon them. His touch was slow, sure, sensual. His hands commanded her muscles to release tension, and they obeyed him, in level after level of helpless yielding and softening. Melting.

She wished that she’d lain down after all. Sure, it would have been stupid, but letting him into her house had been stupid, eating his food had been stupid. Letting him touch her body was downright idiotic. What was one more level of stupidity in the grand scheme of things?

Time slowed, stretched, and collapsed slowly back in on itself in great, pulsing waves. She forced her eyes open when she realized that his hands were cupping the curve of her waist. “You’re south of my thoracic vertebrae, buddy, and heading straight into no-man’s-land.”

His hands lifted away from her body. “Sorry.”

She missed the warm contact instantly. “Don’t sweat it. I know how it is,” she mumbled. “One vertebrae just leads to another, and hey presto, before you know it you’re giving me a foot rub.”

He started in on her shoulders again, with a muffled crack of laughter. “I think I’d get distracted along the way,” he said

She had to struggle not to moan. It had been so long since she’d been touched at all, let alone with any real tenderness or skill.

Maybe she never had been. She’d never melted like this for anybody. Dangerous thought. Delete, delete. “My head’s going to float right up off my neck,” she said. “I didn’t know my neck was that tense.”

“After teaching five classes, it would be strange if it weren’t.” His fingers caressed her neck. Lovely heat lanced down into her chest, her belly, her thighs. “I see now why you’re in such great shape.”

“Look who’s talking,” she murmured. “If you’re ever short on cash, you could set up a booth and charge the ladies to massage your bod.”

“Oh yeah?” His voice was wary.

“Sure. Say, fifteen bucks for a two minute fondle. Strictly PG-13, above the waist, of course. I’ll sell the tickets, if you give me a cut.”

His hands stopped moving. She babbled on, dazed and thoughtless. “The gay guys would go for it, too. We’d rake in the dough.”

His voice was devoid of irony. Her eyes popped open in alarm

She looked back over her shoulder. The hot glow in his eyes brought her feminine instincts to high alert. She pulled away.

She and her big dumb mouth. Sexy banter with a guy she barely knew, but no nerve to back it up. Bad girl. Very immature.

“Um, sorry,” she said warily. “That was hot peppers and beer talking. I actually didn’t mean to flirt.”

He gripped the edge of his sweatshirt and peeled it over his head.

“Holy cow.” Margot’s voice shook. “What the hell are you doing?”

He let the sweatshirt drop to the floor. “How can you set a price for a two minute fondle if you don’t do any product testing?”

She was at a loss for a snappy comeback. “I was joking! Are you familiar with that concept? Do you take everything dead seriously?”

“I take things however I feel like taking them.”

She examined each and every possible interpretation of his words as she stared at his body. Usually blond guys were white and pasty, with bluish undertones like skim milk. McCloud’s body was gold-tinted.

It glowed with power, wildly out of place in her dingy kitchen. His physique had the nervy, sculpted look of an Olympic gymnast. Every muscle knew its job, and did it superbly. Nothing missing. Nothing superfluous. Total freaking perfection.

The intensity of his eyes held her motionless. He put his arms behind his back. “I won’t touch you. No groping. Word of honor.”

His words made her abruptly conscious of her female body. How naked and soft and vulnerable she was under her scruffy loungewear.

She stared down at what the damp chill in her apartment did to his dark nipples. He had goosebumps. That was a good sign. It proved he was human, at least. He looked so warm and supple and strong.

Oh, Lord. She could just eat him up with a spoon.

She took a step back, and wobbled as her hip bumped the table.

“OK,” she said. “Enough funny stuff. Showing off will get you nowhere. Put your damn shirt back on before I hyperventilate.”

A ghost of a smile touched his stern mouth. “Touch me.”

The command in his deep voice resonated through her body. Her hand lifted, drifting in the air between them. He moved closer without seeming to move at all, and her hand was splayed against his hot chest.

Her hand moved of its own accord, fingertips brushing over lean contours, ridges of bone, soft skin, the vibrant power of the muscle beneath it. His tight nipple tickled her palm. Her hand pressed against his solar plexus, felt his heart throb. She glanced at his crotch. His hard-on pressed against his jeans. His face was flushed and taut, eyes hazy. The thick muscles of his shoulders were rigid with strain.

“No hands, huh?” Her voice was wondering. “You meant that?”

“Anytime you want that to change, you let me know.”

His breath was quick and heavy. His heart thudded against her hand. He was more power than she knew how to handle, like being perched on a racehorse spoiling for a run. Behind the wheel of a Ferrari, charged up and ready to let ‘er rip. Vibrating with raw energy.

Her hand shook where it touched his hot skin. He was as exotic and alien as an undiscovered country. She was dazed. Paralysed with shyness. Something cynical snickered way in the back of her mind. Poor Margot, forced to pet a hunk’s gorgeous pecs, yeah, break out the violins.

Her mouth was inches from that alluring hollow in his neck. She could just lean forward and . . . taste him. And for as long as it lasted, she could forget the whole scary, sordid mess of her life. She would think of nothing but him. Lose herself in him. God. She ached for it.

“I don’t know you,” she whispered. “Not the first thing about you.”

And he left it at that. No attempt to wheedle or cajole. No bullshit.

His blunt honesty was seductive. She wanted to grab him, twine herself around him and just soak him up. All that heat, all that power.

And that would be it. She would get nailed tonight, by a great big gorgeous guy about whom she knew absolutely nothing except that he rarely smiled. Which wasn’t much of a recommendation.

Yeah, like that counted worth beans. Mikey would fawn over any clown who fed him barbecued pork, excluding her own wretched self. McCloud would think she was a tramp for putting out so fast, and then she would hate herself for being used, blah blah blah. She couldn’t do this to herself. No way. She was hanging on by a thread as it was.

She lifted her hand to his mouth and pressed her forefinger against his soft, warm lips. “We’ve got to stop.”

He rubbed his cheek against her hand. His glinting blond beard stubble rasped her skin. The sensual, animal gesture made her heart turn over with hungry longing. “How come?” he asked. 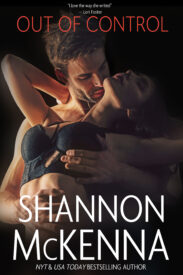