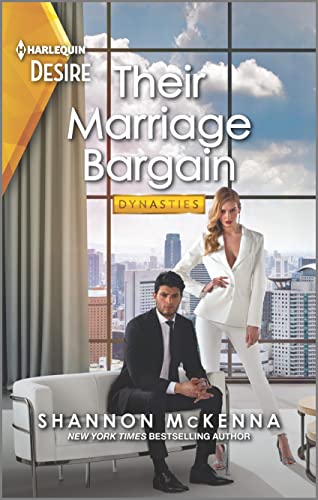 Book One in Dynasties: Tech Tycoons

From lovers to enemies to…

CEO Caleb Moss needs a business arrangement marriage to keep controlling interest of MossTech. Tilda Riley must prevent a hostile takeover of her family company—and protect the daughter Caleb has never met. The only solution is for these oil-and-water exes to join forces.

Until desire turns a marriage on paper into a hotbed of passion. Their child binds the newlyweds together. But a vengeful enemy bent on their mutual destruction is sowing seeds of doubt and betrayal that could tear Tilda and Caleb apart—this time forever. 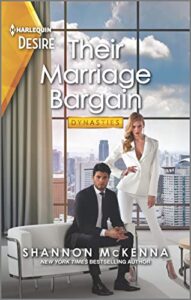 “You have got to be joking,” Caleb Moss said, staring at his grandmother. “But I don’t find it funny.”

Elaine Moss wore an elegant white suit, her back ramrod-straight as she gazed out the floor-to-ceiling window of Caleb’s corner office, which overlooked downtown Seattle.

“I’m absolutely serious,” she said. “I’m simply not afraid of making unpopular decisions. A skill you need to cultivate as CEO, young man.”

“I’m well aware, my love. That’s precisely why this is happening.”

“By insisting I get married before my birthday? In two months? I can’t, Gran, even if I wanted to! Small detail. I don’t have a fiancée.”

“Find one,” Gran said lightly. “You’re free to refuse. On your birthday, I’ll wish you many happy returns, and pass the controlling interest in MossTech to your uncle Jerome. Who will instantly fire you and hire his lickspittle yes-men. He’ll fire Marcus and Maddie, too. But you three are all very gifted. I’m not the least bit concerned about your long-term career prospects.”

“And MossTech itself? You don’t give a damn about Grandpa Bertram’s legacy?”

Elaine shot him a glance. The dart had landed. His grandmother was acutely sensitive about anything that threatened MossTech, their family firm which specialized in cutting-edge food and agriculture technology. “Of course, I give a damn. But his three grandchildren are his legacy, too. And when you get to my age, things start to look different.”

“The world doesn’t work this way. It’s not the court of Henry the Eighth.”

“Thank God for that,” Gran murmured. “He wasn’t quite the model for harmonious matrimony that I was going for.”

“This is not a joke,” Caleb growled.

“I agree, one hundred percent,” Gran said. “Marriage for everyone. The boys by age thirty-five. Maddie by age thirty. Unfair, I know, but as always, men can afford to dawdle in these matters, while women never can.”

“I’m sure Maddie’s going to have something to say about that.”

“She can carry on until her throat cracks,” Gran said. “It changes nothing.”

Gran had that look that indicated that further argument was futile. His choices now were full compliance, or war. And with Gran, one had to think long and hard about choosing war. She was always three steps ahead.

“Indeed, he did not. But sometimes you have to relinquish control of one thing in order to maintain hold on another.”

“Stop with the cryptic platitudes,” he said. “You can’t force me to do this.”

“No, but even if I were to drop dead of a heart attack this very day, the consequences of not doing it will remain. It’s a done deal, my love. I was waiting for paperwork to be finalized to tell you, and for Marcus to come home. Then his return date got pushed out twice, and your birthday is looming, so I’m starting with you, Caleb. You’re the oldest. The first fruit to fall.”

“It annoys me that Marcus is off gallivanting. It shows poor judgment as a CEO to let your CTO spend his time slashing through some sweaty jungle with a machete.”

“It keeps him out of trouble,” Caleb said.

“So would marriage,” Gran observed. “Nothing like a family to keep an energetic man busy.”

“Gran, be reasonable,” Caleb urged. “You’ve groomed us all our lives for this. You trained us to care about MossTech, and now you’re just flushing it?”

Gran’s lips tightened. “When you’re a cunning and devious old man yourself, pulling strings to protect your own legacy, then maybe you’ll understand me.”

“I can’t wait that long,” Caleb said, biting the words out.

“Mr. Moss?” It was his assistant, Sergio. “A Mr. Herbert Riley from Riley BioGen to see you? He’s actually not on your calendar, but he says that, um…that Mrs. Moss made the appointment?”

“Hold on, Sergio.” Caleb turned to Gran. “We had a meeting with Herbert Riley scheduled tomorrow, and the situation is awkward enough, with you and Jerome trying to annex his company. Why on earth did you call him in here today?”

Gran fluffed up her spiky white hair. “You’ll see. Don’t make the man wait, Caleb. I know you men like to play at alpha-animal behavior, but I think it’s just plain rude.”

Hah. Like his grandmother wasn’t the reigning queen of alpha-animal behavior.

He hit the intercom button. “Send him in, Sergio.”

As CEO of MossTech, Caleb ran a tight ship, but the power dynamic got scrambled when Gran threw her weight around. When she started snapping orders, people got confused about who was in charge? She used to be CEO herself, and she still owned a controlling interest. But that expectant glint in her eyes made him tense. She had a fresh zinger for him.

Caleb froze. Tilda? She was on the other side of the world. No way was she—

She and her father walked in, and Caleb’s insides went into free fall.

It had been nine years, three months, three weeks and two days. The relentless calculator in his mind kept grinding out hours, minutes. Even seconds.

She’d been nineteen the last time he saw her. Small, curvaceous, short, even with heels. Her blond head fit under his chin. Heart-shaped face. Hypnotically beautiful green eyes that revealed everything she thought and felt.

The last thing he’d seen in her eyes was shock. Hurt. Heartbreak.

Her eyes showed him nothing now. Her thick blond hair was twisted into a sleek roll, no dangling wisps. No more rose pink lip gloss. Her luscious lips were painted a hot, take-no-prisoners red. She did not smile. Not that he deserved a smile.

“…know my grandson, Caleb Moss, of course? Our CEO?”

“Tilda,” Gran murmured. “Lovely as ever. I’m glad to see you back in this part of the world. I spotted you at the engagement brunch for Ava Maddox a few weeks ago.”

“Yes, it was great to see old friends after so long.” Tilda shook Gran’s hand, then extended her hand to him politely. It was ice-cold.

“You’ve been gone so long,” Gran went on. “Where were you, anyway? Singapore? South Korea? Taiwan?”

“All over Asia,” Tilda said. “Wherever work took me.”

Gran clucked. “So far away.”

“You must be thrilled to have your precious granddaughter home to spoil.”

“I am indeed,” Herbert agreed.

That gave Caleb a nasty jolt. He turned to Tilda. “You’re married?”

Her green eyes snapped onto him. “No,” she said coolly.

The awkward silence was broken finally by Herbert Riley. “So, Elaine. We shoehorned this meeting in at your request, and we don’t have much time. Why did you insist that Tilda and I meet with you today?”

“Sit down.” Gran beckoned them to the couch and chairs. “Shall I ask Sergio to bring coffee, tea? Espresso? A glass of Scotch?”

Command came to Gran as natural as breathing, but Caleb was annoyed to have his office, assistant and liquor cabinet all co-opted by his grandmother in front of Tilda Riley.

He also caught the flash of amusement in her eyes.

“It’s early for Scotch,” Herbert said gruffly. “Let’s get down to business, please.”

Caleb belatedly realized that they were still on their feet, waiting for him to join them before they sat down. Damn. He walked over with a murmur of apology.

Gran perched on the edge of a chair. “I wanted to meet alone because this must be discussed only with the persons most intimately concerned,” she began.

“If MossTech annexes Riley BioGen, everyone in my company will be intimately concerned,” Herbert said. “By which I mean, unemployed. Over eight hundred of them.”

“I’m well aware of that,” Gran said. “I am proposing a solution. Which involves you two young people.” She indicated Tilda and Caleb.

“Don’t be rude,” Gran murmured. “I’m proposing something different from Jerome’s idea. A friendly merger. One that safeguards the jobs at Riley BioGen.”

“Your overtures aren’t friendly,” Tilda said. “You knew Dad was having health issues. You took advantage of his distraction to buy in as a silent partner, and now you’re manipulating our shareholders. Threatening a proxy fight. Not friendly, Mrs. Moss.”

Tilda’s chin was up, her eyes alight. “You did it yourself, or you allowed it to be done on your behalf. For our purposes, I don’t see any difference.”

“We know how much debt you have,” Gran said. “If you don’t accept our offer, Riley BioGen will go bankrupt.”

Tilda’s eyes narrowed. “We can manage our debt.”

“I wish to propose another solution, if I could get a word in edgewise,” Gran said. “You’re a bright girl. What if you could safeguard the eight hundred jobs at Riley BioGen? We would prefer to join forces. Not destroy your company.”

Tilda crossed her legs, giving Caleb a distracting view of her shapely calf. “Why suddenly change your tune? What do you want, Mrs. Moss?”

“The most natural thing possible,” Gran said softly. “A marriage.”

“Ah…” Herbert frowned at Elaine. “Well, in a theoretical sense, of course.”

Tilda’s eyes went huge in the silence. “Wait,” she said. “No way. Is this some bizarre joke? Because it’s not funny.”

Herbert Riley’s eyes widened. “Dear God, Elaine. Get someone to help you sort your meds.”

“Do not apologize for me, Caleb.” Gran’s voice was sharp. “I take responsibility for every word I say.”

Tilda let out a brittle laugh. “Wow. Mrs. Moss, thank you. It’s a very romantic offer, and I’m deeply flattered, but I’m afraid I must decline.”

“Then we’ll proceed with the proxy fight,” Gran said.

“You might not be surprised to learn that this isn’t even the weirdest idea my grandmother has had so far today,” Caleb said through his teeth. “She’s informed me that I have to get married before I’m thirty-five. Or else the sky falls.”

“Elaine, you’re being ridiculous,” Herbert said. “This is my daughter’s happiness you’re talking about. These two hardly know each other. It’s insulting.”

Gran turned a speculative gaze onto Caleb and Tilda. “I’m paying her the highest possible compliment, Herbert. I wouldn’t propose this to just anyone. And I think these two know each other quite well indeed.”

Tilda got to her feet. Her face was a hot pink. “Let’s go, Dad.” She looked up at Caleb. “Call a family meeting, Caleb. It’s time to take away Grandma’s car keys. Before someone gets hurt.”

“Bite your tongue, you mouthy little minx,” Elaine snapped back. “Think about it. Look at your balance sheet. Think about your employees. Then we’ll talk.”

Caleb got to the door in time to open it before Tilda did.

But Tilda made no eye contact as she swept out, head high, chin up. 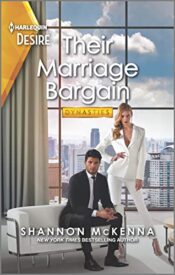