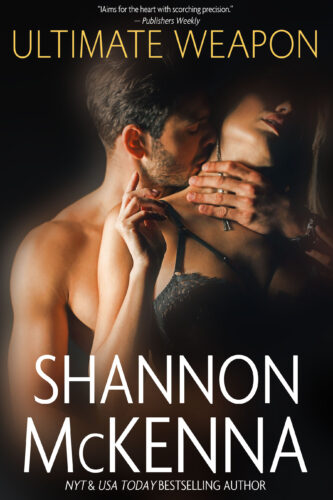 Book Six in The McCloud Series 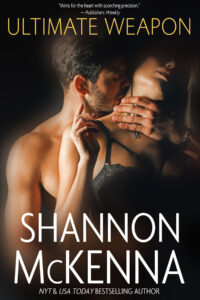 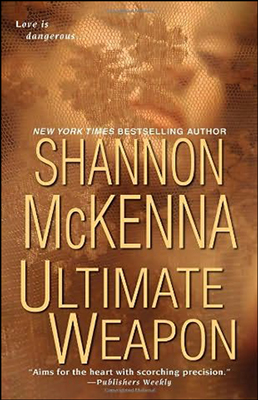 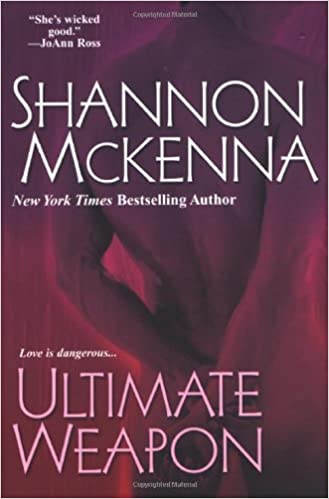 Tam cupped her tea in both hands and inhaled the steam as she studied his face. She didn’t like to admit it to herself, but it was taking more energy than she’d expected to withstand the gale force of this man’s sex appeal. Erin had not been kidding.

For some reason, Tam had been expecting, a generic, male underwear model sort of good looks. Which was unfair. Erin was married to Connor, after all, and even Tam could appreciate his craggy, fierce good looks. Even in her most virulent, man-repelled moods.

But still. She was utterly unprepared for…well, him.

Lethal. It was the first word that came to mind, even though it embarrassed her. He was so solid, so hard looking. Dynamic, and yet calm and focused. Nothing soft about him, except for the gloss of that thick brush of black hair. She wanted to touch it, just to see if it really was as soft as mink. Gypsy dark eyes, inky brows and lashes. The planes and angles of his face were starkly masculine, arrogantly sensual, but that smile was pure temptation. She’d considered herself impervious to men’s lures, so why was she marveling at the lines carved into his cheeks when he grinned, or that blinding flash of teeth against his dark skin? Get a fucking grip, Steele. This is unacceptable.

His face looked hard-used for a rich business consultant. There were bumps on his slightly crooked nose, a white diagonal scar sliced through one thick, slashing eyebrow, and subtler scars that only a trained eye accustomed to evaluating the effects of cosmetic surgery could catch. And the hands, of course. He’d fought, in his life. Fought hard. Won, more often than not, judging from his vibe.

And what a vibe. It blasted out of him, full force. It was out of human range, a frequency that only a fucked-up freakoid with a weird, checkered past like hers could perceive. But so different from the danger waves that had throbbed out of the sicko madmen she’d had the misfortune to get close to before, like Novak, Georg, Drago Stengl. Their vibration had been a miasma of rot that made her tissues recoil.

Not so with Janos. In him, the danger was blended like a cocktail with seductive, predatory male sexual energy that assaulted her at every level. It silently said, beneath the smooth veneer of perfect gentlemanly courtesy, that he wanted to fuck her, left, right, up, down and sideways. And that it would be well worth her while.

She didn’t doubt it. But she wasn’t going to listen, not even with her nerves jangling, her skin prickling, her heart thudding. Back off, boyo. This was business, and that was how it was going to stay.

“You’re not what you try to appear,” she said. “You are charming and flirtatious and inscrutable, Mr. Janos, but tiny details betray you. Your hands should be soft, from handling nothing heavier than a pen and a computer mouse, but yours are scarred and callused. And your face. Your nose has been broken. Several times it wasn’t set. You can’t blame the martial arts club. If it happened during sparring, why would a rich, image conscious businessman neglect to get his nose set? Of course, he would not.”

“So it happened when you were a boy,” she went on smoothly. “No one set your nose then, either, which implies poverty, neglect, or both. I’m thinking an urban environment, judging from your basic vibe. And those scars on your face, the tiny one above your lip, the one cutting through your eyebrow, the one on your forehead that you almost hide with your hair, it makes me wonder what other scars you hide with the beautiful six thousand Euro suit you’re wearing. You’ve had laser treatments, dermabrasion, but the ghosts always remain.”

“I’m glad you like the suit,” he said blandly.

“You’re no country boy,” she went on. “But you’re not from Rome. You don’t have the accent of the Roman periphery. Your Italian has a Roman cadence, but to my ear, it is a studied one, not a native one. You grew up somewhere else, speaking something else, and learned your perfect Italian later. And you grew up rough. Very rough.”

He stared back at her, frozen into stillness. His eyes were chips of black, opaque glass. “Go on,” he said.

She set down the teacup, threaded her fingers together and rode the swirling current deeper into wild speculation. She felt like she was drifting on a boat into a night-dark cave of mysteries, and only the currents of air, the echoes, the flutter of distant bats’ wings could hint at its true vastness. It was dangerous. And . . . exciting.

She pondered his stark face for a moment, and went on. “You are a ladies’ man, and your charm is slick, practiced. You are accustomed to controlling women with sex, but unlike other men with that ability, your ego does not rest on it—although your looks and your body would entitle you to—“

“Thank you,” he murmured.

“I am not complimenting you,” she said, her voice impatient. “This is an analysis, Janos. Not flattery. Not flirting.”

“Forgive me,” he said, after a brief, startled pause.

She did not acknowledge his sarcasm. “Sex is a tool for you,” she said. “But when a tactic of seduction does not achieve its goal, you just change tactics without getting your pride hurt and try again, and again, and again. This suggests a lack of machismo not normal in a man from any culture I know—particularly not one who professes to have grown up in Italy. Italian men aren’t known for their humility, or their self control. This coolness, this calculation regarding sex is a trait I associate with high end sex professionals.”

She pounced. “Ah. I’ve hit a sore spot,” she murmured. “Have you ever been a gigolo, Mr. Janos? Do you have a more colorful past than you lead people to believe? Some dirty, dangerous secrets of your own?”

He stared at her. His eyes burned.

“Tell me something, Janos,” she whispered. “Can you make your cock hard on command?”

His mouth was a hard, flat line. “Yes,” he said. “But in your vicinity, no effort is necessary.”

“What a lovely sentiment. Should I be gratified?”

“Reach under the table, and take the measure of your future gratification right now,” he said.

“Oh, my.” She pretended to be scandalized. “The veneer of the perfect gentleman is cracking.”

“You should not wonder at it, since you shattered it yourself with an ice pick. See what lurks beneath the veneer. Go on, feel it. It’s yours for the asking. I do not think you will be disappointed.”

She stared at him, her heart pumping. The game had slipped out of her control and taken on its own life. She realized that she was tempted to do exactly as he invited. To grasp his cock, test his heat, the hardness. Feel the vital energy of him pulsing against her hand.

Currents of silent communication swirled between them, dangerous eddys of challenge. She dragged herself back from the brink.

“On the contrary, Ms. Steele. You are. The subject is closed.” He rose to his feet. The hard tone of his voice and the coiled tension in his body suggested that he was reaching the end of his self control.

Good. Exactly where she wanted him. Adrenaline pumped through her. She got up, and moved in behind him. “Everything you told me is a lie,” she challenged him. “Capriccio Consulting is a lie, your charm, your ego stroking offers. I can’t see inside you, Janos. All I see are smoke and mirrors. Which makes me think that perhaps there is no one inside at all. Just a gutted, blackened hole. Which means . . .”

She seized him from behind, pressing the tip of the tiny dagger from the ruby studded horn necklace against the throbbing pulse point in his throat in one swift lunge. “Who the fuck are you, Janos?” she asked softly. “Who sent you?”

His throat worked. “I will warn you only once,” he forced out. “Release me. Now.”

“I’m warning you, too,” she said. “This blade is coated with a poison that works with incredible speed. If the dagger breaks the skin, within seconds your convulsions will be so violent, they will probably snap your spine.”

His larynx moved beneath the blade. “Cut me, then.”

That was so unexpected, her brain wouldn’t process it for a second.

“Go on,” he prompted. “Why should I fear death? I am a gutted, empty hole, no? Death holds no terrors for me. So cut me.”

She opened her mouth, not sure of what she was going to say, and in that moment of hesitation and doubt—

Holy . . . shit. The dagger flew, bounced. She was spun and flipped. Pain flashed, white hot, through torqued tendons, and oof, her breath was knocked out and her head hit the floor, painfully hard.

She was flat on her back, staring up at the bottom of the table, at the protruding carved leg of his overturned chair, seeing stars.

Janos pinned her, blocking every point of leverage. Her arms were stretched high, both wrists clamped in the manacle of one of his enormous hands. His steely forearm pressed her chin up and put intense pressure on her windpipe.

How…? God, he was fast! No one had gotten the better of her like that in years, not since she’d made it her damn business to learn to fight like a hellion. She fought the panic, the fury. “What happened to your death wish, you lying snake bastard?”

His face was inches from hers, a taut mask of fury. “I reconsidered it. I do not like a poisoned blade at my throat.”

His forearm lifted, enough to let a stream of air rush through her bruised throat. It rasped, making her cough. Their eyes were locked.

“Ten seconds ago you were about to kill me. Why should I?” he asked. “Do I look that stupid?”

She coughed again. “Who are you?”

“You are in no position to ask the questions. Enough about me. Let’s talk about you. My turn, to analyze your cringing inner self. Turnabout is fair play, no?” 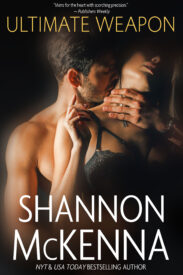